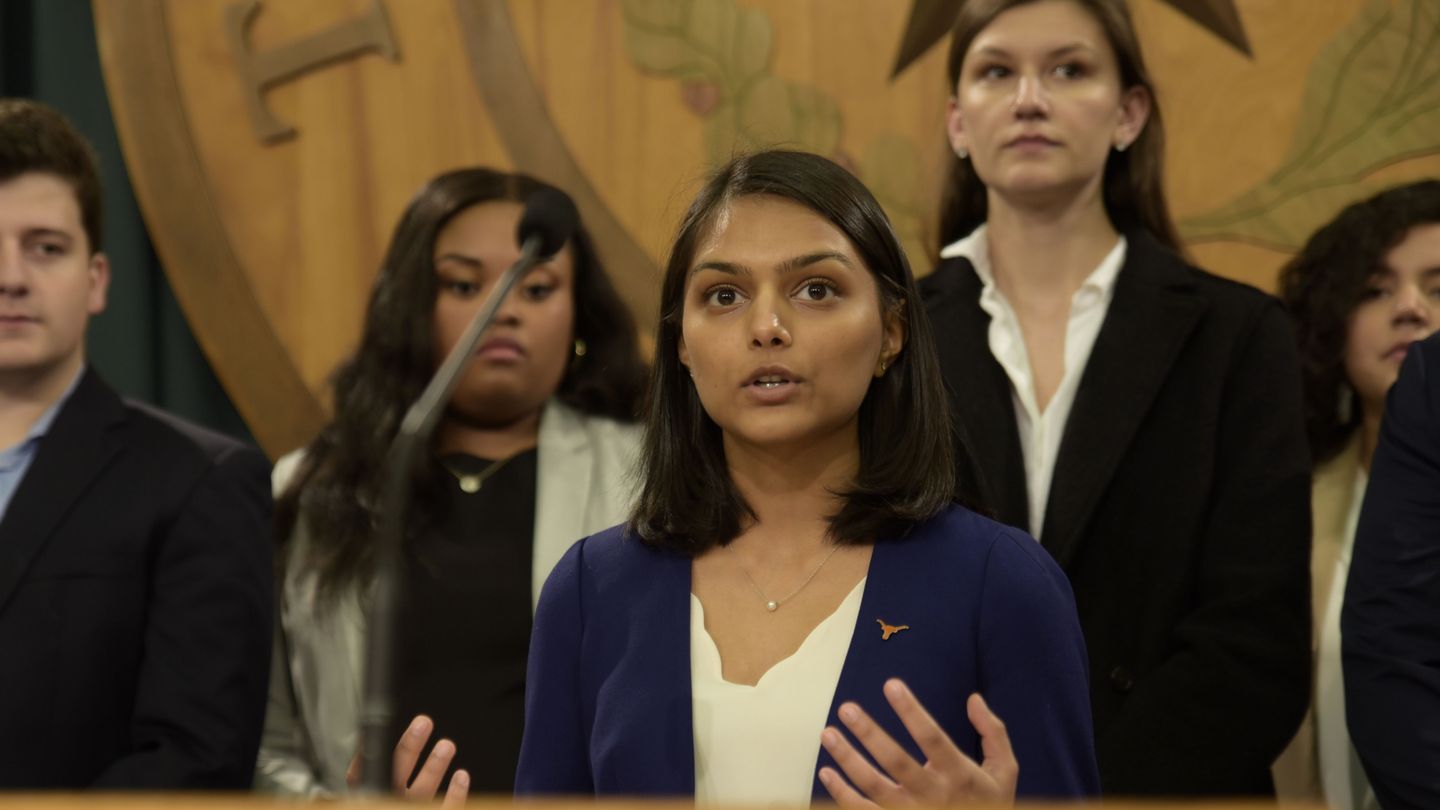 In the months leading up to the 2016 Presidential Election, Maya Patel discovered she was really, really good at getting people excited about voting.

Shortly after kicking off her freshman year at the University of Texas at Austin that fall, she enlisted as a Volunteer Deputy Registrar (VDR), which allowed her to register fellow classmates to vote in the upcoming election. Within a month, she had helped over 250 classmates and peers sign up.

“I loved helping students figure out how to register, and how to actually vote, and giving them nonpartisan voting information,” Patel, now a senior majoring in chemistry and recipient of the 2019 MTV Leaders for Change grant, told MTV News. “I wanted to figure out ways that I could step up my involvement.”

Today, she is the Texas State Coordinator and Chair of the Student Advisory Board for the Campus Vote Project, an organization that aims to institutionalize democratic engagement on higher education campuses. In her role, Patel serves as a link between students and community organizations that work on voting rights issues and helps promote voting access on campuses across the state and country. At UT, she also works closely with TX Votes, a student-run organization striving to assist other students with the voting process, while inspiring the entire campus community to become civically engaged.

Patel’s work at UT has made voting more accessible — and easier to understand — for the system’s 50,000+ enrolled students. She created and piloted a classroom voter registration program, which allowed students to register without disruption to their schedules. “That can be a challenge at UT when some of these classrooms have 500 students in them and you only have 50 minutes or less…to get all of the students registered to vote,” Patel explained. “So we figured out what worked and what didn’t. For the 2018 election cycle, we went into over 300 classrooms and registered students in class — anywhere from a 15-person class to a 500-person class. That proved to be our most effective way of reaching students.”

But Patel knows that registration is only half the battle for increasing voting numbers; that’s why she also led the effort to create a second on-campus polling location for the 2018 midterm elections at the university’s Austin campus. “In 2016, we saw lines that wrapped around the one on-campus polling location,” she recalled, adding that at one point, students were waiting for more than three hours. “I saw so many students leave because they…didn’t have time for that.”

During a recent phone interview with MTV News, Patel talked further about the ways in which young people are fighting for voting access, along with the notable impact that’s felt when students work together towards a stronger democracy.

MTV News: What are some obstacles that students face when it comes to registering to vote?

Patel: Texas is a really tough and unique state; there are lots of factors that affect students’ ability to vote. For one…the deadline to register is 30 days before every election. That proves to be difficult at schools because students generally come to campus in late August. When there’s an election in November, the registration deadline is the first week of October. Effectively, we have about a month after everyone gets settled to register. The same goes for primaries, which are usually in March, and the deadline for that is the first week of February. Students generally don’t come back [from winter break] until around the 20th of January. So that only gives us a few weeks to get everyone registered — and you have to re-register every time you move.

Additionally, people can’t just register other people to vote in Texas. You have to be a Volunteer Deputy Registrar, or VDR, and that requires training. It differs county by county, and for each county…you have to redo that training with a…specific process. You have to turn forms in to the tax office within five days — not five business days, but five days. We register a lot of voters over the weekend or on Fridays, and that means that those weekend days count towards when we need to turn in our forums. A lot of students don’t have cars to get to the tax office. We had to develop a system in which there’s a VDR who has a car, who can turn in forms that have been passed off to them by other VDRs who don’t have cars.

MTV News: And what about issues at the polling place? What challenges do students experience there?

Patel: In this state, we have voter ID laws [requiring particular forms of identification]. There are very specific documents you need in order to actually vote, which includes a Texas driver’s license, passport, or some sort of Texas government-issued ID. It does not include a student ID, which is unfortunate. Out-of-state students who want to vote in Texas need to make sure they have their passport, and a lot of students keep their passport at home — or don’t have one. Alternatively, they need to figure out how to fill out the Reasonable Impediment Declaration and get alternative forms of ID, which is a big pain in the butt.

On top of that, a lot of universities don’t actually have a polling location on their campus. At UT, we’re lucky to now have two, but that’s not always a guarantee. We’ve had elections where we had one day of early voting on campus, or didn’t have an on-campus polling location.

MTV News: What are some strategies you have used in order to get people excited about voting?

UT is a school of 52,000 people, so it’s impossible for our small little group of TX Votes to reach everyone. But we created something called the Civic Engagement Alliance, which is an alliance of over 110 student organizations —  everything from cultural to professional societies, from social organizations to Greek life. By joining, these groups commit to having at least one VDR in their organization and helping members register to vote and actually vote. …. This has been a really effective way to reach a lot of students.

And we have fun events. During the 2018 [Midterm] Elections, we hosted an event called VoteFest, where we had local bands play in the West Mall, which is an outdoor space right next to one of our polling locations. … We had pizza and breakfast tacos and lots of organizations tabling at the event. We were just trying to bring attention to the fact that there was an election going on and what the issues were while trying to make it fun, so students could listen to music while they waited in line [to vote].

MTV News: How have your fellow students reacted to the work you’ve been doing on campus?

Patel: I’ve been at it for three and a half years now, and when I first started, TX Votes was so small. There were maybe 10 super-active members, but as I’ve gotten more involved, I’ve done more and more things, and received a lot of press and media coverage. I think people are seeing the work that I do…which makes them want to become more involved…to help their communities become more civically engaged.

MTV News: What would you say to someone who thought their vote didn’t matter?

Patel: I’ll often have students come up to me and say, ‘Oh, well, I don’t really care about [politics]’ or ‘I don’t make a difference,’ but, ultimately, everything that someone cares about is tied back to voting. If you told me, ‘I really enjoy going to Zilker Park on the weekends,’ I’d say, ‘Well, that is affected by your local elections, and sometimes we have propositions on the ballot that affects the funding for the park service in Austin.’ If someone told me they cared about dogs, I would talk about animal rights and leash laws, or if someone told me they liked playing video games, I would say, ‘Prices are really connected to taxes, and taxes are connected to voting and the elected officials that you bring into it.’

MTV News: What’s the next step for you? Where do you see yourself after graduation?

Patel: I graduate this December. I currently work part-time with Campus Vote Project as the Texas State Coordinator, and that will become my full-time role. Long-term, I eventually want to go to law school and get a master’s in public policy to connect my chemistry background with policymaking. There is a serious disconnect between scientists and policymakers. I want to be a translator between the two groups and be able to use my undergraduate chemistry education with this master’s in public policy and law degree to help create effective policy that makes sense and is also scientifically sound.

MTV News: Ahead of the 2020 Presidential Election, what message would you like to send other students across the country?

This interview has been lightly edited for clarity.

Leaders for Change is an MTV grant program that invests in young people doing extraordinary work at the local level to advance voting access. From getting polling places on college campuses across Michigan to registering voters in Chicago jails to providing rides to the polls in Georgia, these young leaders are breaking down the barriers that make it hard to vote in their communities.